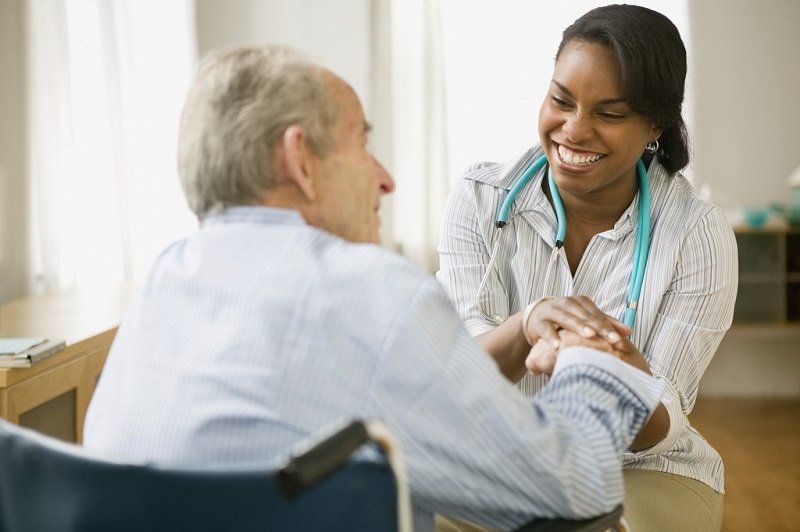 When you work in healthcare, you learn to interact with all different kinds of people. One of the most common, but also challenging groups you encounter is older patients.
Working with the elderly isn’t so different as treating the rest of the population. Sure, you might need to speak louder, repeat yourself or handle with care. But the elderly still want independence, respect, and dignity. To successfully work with older patients, keep in mind the following few tips.

When someone loses their independence, their self-esteem takes a blow. They now know they can no longer do the things they once could. But treating them like they’re capable, intelligent and independent can make them feel like, well, people. In a society that often treats older people as a burden, this can make all the difference. If they don’t want your help, act like you’re not giving it. However independent they think they are, they aren’t invulnerable. Stay by their side and be ready for anything, but don’t seem like you’re coddling them.

2. Be Patient and Communicate Clearly

Older patients aren’t as fast as they once were. Their speech, thoughts, movement, and reactions are often slower. Take your time with them. If they don’t react to you like they should, ask if they can hear or understand you. You may need to speak louder and slower. You should also explain everything you are doing to them or with them. Speak clearly and simply so that they understand.

3. Be Aware of Memory Loss

Dementia and Alzheimer’s patients may be difficult to work with if unprepared. Their illness can make them seem infantile, irritable, or even aggressive. If they struggle with remembering, knowing where or who they are, or getting words out, it can disguise other problems like concussions. Learn more about Alzheimer’s and Dementia at the Alzheimer’s Association website.

Listening to a patient’s pains and concerns is one thing, but treating and transporting older patients can allow you to exercise empathy. Take this opportunity to learn, listen and comfort. Many elderly people’s friends have passed, and sometimes family doesn’t come around too much. You may be the only person someone has talked to all month! Listen to their point of view and use eye contact. Doing so, you can allow more accurate and honest communications to open up.

So many people want to tell their stories, especially if something terrible has happened to them. Older patients always have stories to tell after living long lives, even ones they think of as uneventful. They still want others to know their stories. Who knows what secret past you’ll uncover while you socialize with your patient!

As the population ages, healthcare professionals will be seeing a lot more of the Baby Boomer generation. That means ambulances will be transporting more of them. Even though every patient is different, know general expectations and guidelines when you’re dealing with older patients.