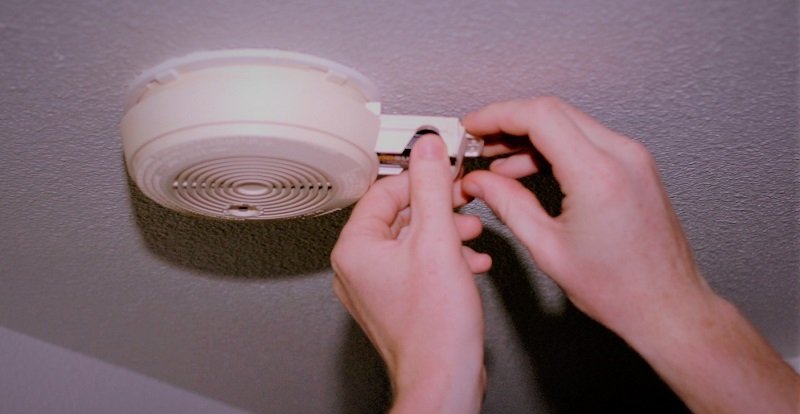 If you work in emergency services you’ve probably seen first hand the necessity of functioning household alarms. Perhaps you’ve seen lives saved because of them or tragedies that may have been prevented by them. Make sure you take the time to consider your own safety–and the safety of your family–and install the proper alarms at home. Encourage friends and relatives to do the same!

Many states require smoke or fire alarms in homes, as the U.S. Fire Administration details here. Unfortunately, even compliant residents may not keep up with maintenance. Neglecting to keep up with a smoke detector could cost you your life. That’s why EMS crews encourage regular maintenance.
A home inspector cannot legally pass a home inspection without properly working smoke detectors. Sometimes the alarms annoy people, like when they go off whenever someone cooks. Did you know that 23% of deaths from house fires come from faulty smoke detectors? According to Nacchi, 60% of the time it’s because homeowners have taken the battery out due to false alarms. While false alarms can be annoying, those batteries could be the difference between life and death.
Many people don’t know this but there is a way to prevent those annoying alarms when your bacon gets a little overcooked. CPSC explains that there are different types of smoke detectors. Some detect both ionization and photoelectric smoke but others detect only the latter. The detectors that do not detect ionization are the best for near the kitchen.
Test your smoke detectors once a month. Once a year, change the battery. Some people remember by always changing it on their birthday or at the start of Daylight Saving Time.

Radon is a gas that results when uranium in the ground begins to decay. This happens naturally is generally of no concern. However, when this colorless and odorless gas begins to build up problems begin. The EPA states that Radon isn’t known to have any short-term effects. But, as the leading cause of lung cancer for non-smokers, it causes nearly 21,000 lung cancer deaths each year.
There is no way to tell whether or not you have a radon leak without getting it tested. You can order a professional, one-time test or set up a detector to test the air quality year round.

Natural gas powers many large home appliances. Because of the odor added to natural gas, it is easiest to detect a leak by the smell. As you probably already know, it has a very distinct, sulfurous smell. If you’re still worried that it might go undetected, there are detectors that can signal a gas leak. They often can detect carbon monoxide and propane, too.

Propane is typically used in small amounts. For instance, gas grills use propane. As long as these are kept outside and in a well-ventilated area, the propane generally causes no concern. However, some people use propane to heat RVs and homes where natural gas and electricity aren’t found or aren’t economical.
Propane is heavier than air so, should the container leak or a pipe become disconnected it could quickly fill up the room. This could cause loss of consciousness or death by asphyxiation.
This gas is also extremely flammable and could cause an explosion if exposed to flame. Investing in an alarm for propane could be advantageous especially if it is your primary source of power. If that’s not enough to convince to invest in one, most of these detectors also check for natural gas and carbon monoxide.

If you don’t have a working smoke detector in your home install one immediately. It is a matter of life and death. Likewise, investing in gas detectors may seem like a waste of money but most of the time they are generally inexpensive and have multiple uses. Illness and death from gases such these are preventable and senseless. As an emergency service provider, you already know the benefits of having these detectors. Share this message with all of your non-EMS friends and family as a PSA to ensure their safety and quality of life.