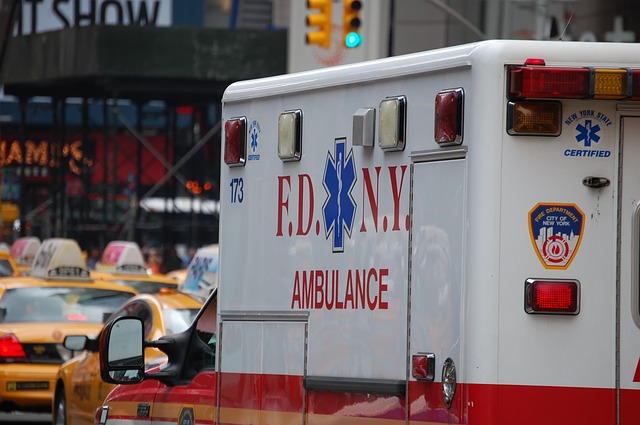 Often being a paramedic is often a thankless job. Lauren German, who played one on the TV show Chicago Fire, said, “They get overlooked. People forget about them and all they do all day long is save lives left and right.” It’s challenging work to aid patients fighting for their lives. Some don’t survive. Other times, the stress of quick transfers to a hospital leaves the vital work performed by paramedics ignored.
Now, however, many people are taking to social media to track down the EMTs who helped them or their loved ones, including celebrities. Foo Fighters’ Dave Grohl recently reunited with the paramedic Johan who assisted him on stage in 2015, much to the joy of both men.
Here are five more celebrities who showed their appreciation and publicly thanked a paramedic:

Randolph Mantooth, one of the actors of the TV show Emergency!, publicly expressed his gratitude towards firefighters and paramedics many times, including in 2010 and most recently in 2017. First responders revived his sister after a near-fatal car crash and treated him for carbon monoxide poisoning. “You tell me all the time, I’m your hero,” Mantooth said in 2017 to a crowd of first responders. “You have it backwards. You’re my hero. You saved my sister’s life, and you saved my life.”

On August 2, 2017, a 70-year-old fan collapsed at comedian Russell Brand’s show in Manchester, England. A rush of doctors and other medical professionals sprang into action while they waited for the paramedics to arrive. The crowd and Brand were supportive throughout. Brand tweeted after the show, “Salford – well done to the NHS doctors for handling tonight’s emergency so expertly, the paramedics and everyone for your patience. Thanks.”

People, among other news outlets, reported that actor Ryan Phillippe broke his leg during a family outing in July 2017. He tweeted: “a special thanks to the paramedics and first responders who helped me at the scene and to the medical staff caring for me now.”

English performer and author Tom Fletcher went to Disney World with his family, as reported by Huffington Post UK. Like many children might, his son stumbled and fell hard into the corner of a table leg. Fletcher commented on the matter on Instagram: “Trouble indeed! Young Buddy here had a visit from the @waltdisneyworld paramedics today after walloping his head on the corner of a table leg. Thankfully it was nothing more than a nice big lump and a bruise but the docs here were great and quick to get to us. Thanks!”

In 2015, Seattle Seahawks football player Ricardo Lockette suffered a severe, career-ending neck injury during a game. He later met and thanked the paramedics who saved him from even worse than early retirement. His doctor said that he could have died that day had he tried to stand up immediately after the injury, or if any other player had moved him.
In May 2017, he expressed his gratitude toward the first responders, two of whom were in the audience, as reported by The Bleacher Report. Lockette said: “The reason that I’m standing here, the reason that I have the opportunity to hug my mom now, the reason that I got an opportunity to go to my daughter’s graduation from elementary school is because of you guys. It’s more like I’m talking to my angels. It’s more like I’m talking to the people who saved my life.” EMS1 relays that when Lockette realized two of his angels were there, he tearfully hugged and thanked them.

Three cheers for our global first responders! When you can, thank a paramedic. They’d like to know how you fared after they handed you off and rarely get a chance to find out.